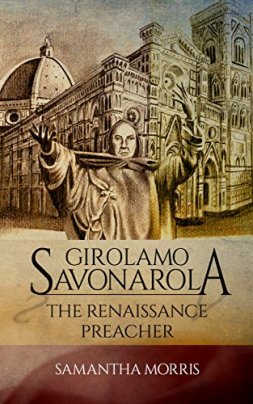 This week, I have Samantha Morris on the blog talking about her latest book on the controversial Girolamo Savonarola.  Don’t forget to chime in on the comments below to win Claire Ridgway’s course on Anne Boleyn…Who would you have at your dinner party?

Congratulations on the recent release of Girolamo Savonarola: The Renaissance Preacher!  This is the second book you’ve written on a figure from the Italian Renaissance.  What drew you to these two people?

Thank you very much. I’ve long had an interest in Renaissance Italy but it was really when I was at University that the interest began to take such a hold on me that I wanted to write about it. I found a book in my University library on Cesare Borgia and, although I was studying archaeology, I decided to take it out. Suffice to say an obsession was born. The whole era is full of corruption, violence and scandal yet at the same time you have the emergence of these brilliant artists who changed the face of art across the world. I came across Savonarola whilst reading around Cesare Borgia – he had a huge dislike for the Borgia pope and I thought I’d delve a bit deeper. This guy took Florence by storm and not in a good way!

What was the most surprising discovery you made in your research?

Not really a discovery as such, but I was very interested when I found out just how much Savonarola’s confession of guilt had been doctored. I knew that the Pope wanted him dead and I knew that the Florentine government wanted him out of their hair, but I was shocked at how they dealt with it all. Torture and then extracting false confessions of heresy – a bit of a pattern in history it seems. Whilst the trial documents and the signed confession have now been lost, there’s a transcript at the back of Pasquale Villari’s work and you can just see how those questioning Savonarola pushed him and pushed him until they got the answer they wanted. I’d very much like to find re-discover the actual documents to see with my own eyes just what was written down and signed by the friar.

If you could completely vanquish one myth about the Borgia family, which would it be?

The incest thing, definitely. It all began after Lucrezia’s divorce from Giovanni Sforza – Sforza said the only reason Pope Alexander VI wanted the divorce was so he could have his daughter all to himself. And the Borgia enemies ran with it – Cesare and Lucrezia were accused over and over again of committing incest but there is no proof for it whatsoever. The only written ‘evidence’ is anti-Borgia propaganda which you just can’t trust. Sadly it’s modern dramatisations of the family in books, TV and video games that just keeps the myth going. I’ve lost count of the amount of times I’ve had to correct someone when they say the Borgias were incestuous!

What are you working on now?

I’ve got a few projects in the pipeline, including a large one on the Medici family. I’ve also got the beginnings of my third book which I’m hoping will be another one relating to the Borgia family although if I’m honest I’m very tempted to start researching and writing about Seventeenth Century England – another huge interest of mine having specialised on the Battlefield archaeology of the English Civil War back in University.

What does your writing process look like?  Do you have to have a certain food or drink nearby? (I HAVE to have coffee!)  Do you listen to music?  Do you have a special spot in your home you like to work from?

I actually write on my laptop on the couch surrounded by books, it gets rather messy! If I had a desk I imagine it would be the messiest desk in the world. I find it really hard to concentrate when things are too tidy around me, at least books and paperwork wise. That makes me sound like a right slob, doesn’t it? For the most part when I’m writing I like to have some seriously heavy metal blasting through my headphones – I’m one hell of a metalhead and find the aggressive stuff actually helps me concentrate better than anything softer. Although occasionally I’ll listen to something a little more ‘easy listening’. For instance at the moment I’m listening to Linkin Park’s Meteora album and earlier on I had After The Burial blasting – stuff like that gives me all the muse!

Who are your favourite historians?  Do you have any in particular that have influenced you in your history journey?

Dan Jones is a huge inspiration of mine. His works are so easy to read yet so detailed and he makes history seriously accessible. Renaissance history wise, Sarah Bradford has to be my biggest idol – her books on Cesare and Lucrezia Borgia are literally my bibles. She’s closely followed by Paul Strathern whose works on the Medici family is just amazing. Donald Weinstein’s academic works on Savonarola have also helped me hugely. If I could ever write to the standard of these people, I’d be a very happy woman!

The subjects you’ve written about would make excellent protagonists in a historical novel, do you see yourself ever writing fiction?

I’ve been very tempted to do so! There’s actually the first chapter of a novel featuring Savonarola saved on my computer, although I haven’t done anything with it for a long time. Perhaps I should pick it up again.

Every historian has that one “Bucketlist” place they’d LOVE to visit, what’s yours?

I’ve been lucky enough to visit both Rome and Florence, which are cities that feature heavily in the lives of the Borgias and Savonarola. I’m heading back to Rome in the new year to do a bit of research and hopefully getting into the Vatican Archives – I’ve wanted to go there for years to see what treasures they have on the Borgia family so fingers crossed they’ll let me visit even if only for an hour or so! Another place I really want to visit is Viana, the small town in Spain where Cesare Borgia is buried. Having interviewed Mark Ryder, who played Cesare in Canal +’s dramatization of the family, we spoke about his own visit to Cesare’s tomb. Apparently it’s an incredibly moving place and somewhere I need to get to.

It seems like it’s the bane of every writer’s existence…writer’s block.  Is that something you’ve dealt with?  How did you banish it?

Writer’s block is the bane of my life! I’ll get to a point with writing and then suddenly hit that wall where I have absolutely no idea what I’m doing with my life and want to delete absolutely everything I’ve written, thinking it’s absolute tripe! When I get to that point I just step back for a bit and try to concentrate on something else – video games or watching something paranormal (I’m a bit of a fan of Ghost Adventures!). Normally after just stepping away for a bit, I’ll suddenly be struck with the need to write again. Some say that the best thing to do is to write through the writer’s block – I’ve tried that and, if I’m honest, I don’t find it works.

And finally, the question I ask every one…If you could invite 5 people, living or dead, to a dinner party…who would you invite?

Hmmm. I’d like to say the entire Borgia family but that would end up being more than five. So I’ll say…Cesare Borgia because well, everyone needs Cesare Borgia at a dinner party. The current Pope would also have a place at the table – Pope Francis seems like a very genuine man and I’d like to pick his brains on the history of the Church that he runs. Jaques de Molay would also be an interesting guy to have there – I’d like to discuss the end of the Templars with him, and just what he meant with his curse just before he was executed. And then I’d invite Juan Borgia, just to find out who actually killed him, and J.R.R Tolkein so we can talk about hobbits. 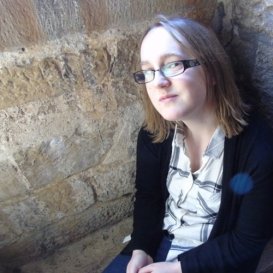 Samantha Morris studied archaeology at the University of Winchester where her interest in the history of the Italian Renaissance began. Since graduating University, her interest in the Borgia family has grown to such an extent that she is always looking for new information on the subject as well as fighting against the age-old rumours that haunt them. Samantha describes herself as an accountant by day, historian and author by night.

Her first published book, Cesare Borgia in a Nutshell, is a brief biography which aims to dispel the myths surrounding a key member of the Borgia family. She runs the popular Borgia website https://theborgiabull.com/ and would love to see you on her site.

You can find Samantha’s books here or here:

2 thoughts on “An Interview with Samantha Morris”